The 2018 Wimbledon final saw two giants of tennis trying to make comebacks in their career to reclaim their titles. Novak Djokovic triumphed, and Serena Williams lost, yet she still inspired the crowd.

Djokovic beat the South African Kevin Anderson to win his fourth Wimbledon championship. Seeded 12th, he won in 3 straight sets to claim his 13th Slam, his first since the 2016 French Open. The Serb quickly took control of the match and was able to break Anderson’s serve repeatedly in the first two sets. The third set went to a tie-breaker, but Djokovic promptly regained his dominating form to clinch the victory.

Immediately after claiming the title Djokovic celebrated wildly in front of his coaching team and wife, with his 3-year-old son joining the crowd during the award ceremony. Although he had won the Wimbledon title in 2011, 2014 and 2015, this tournament was an unexpected victory. In his own words,

“I had many moments of doubt, I didn’t know if I could come back to this level to compete.  There is no better place to make a comeback, it’s a sacred place for the world of tennis, it’s very special.”

With this win, he is now back in the top ten men’s world rankings and chasing the grand slam records of tennis legends Roger Federer, Rafael Nadal and Pete Sampras, just needing one more to equal Sampras.

Germany’s Angelique Kerber won the Wimbledon single women’s final on Saturday, preventing Williams’ quest to win a 24th Grand Slam title and eighth Wimbledon championship. The 36-year-old Kerber went in as 11th seed and beat the favorite 6-3 6-3 to take her third grand slam after winning the Australian Open and US Open in 2016.

Despite Serena’s world ranking of 181 due to missing much of the season after giving birth, she was still odds-on for the title because of her championship mindset, physical prowess, and because she flourishes on the fast surface of grass.

Kerber, who is usually a defensive player, switched up her tactics with an aggressive attacking style of play to strain Williams’ mobility around the court. It was a rewarding strategy which led to Serena dashing to the net frequently and making 12 errors there. The German former world number one also managed to keep breaking the formidable Williams serve.

On winning, Kerber dropped to the grass to revel in the glory. The first German woman to win Wimbledon since Steffi Graf in 1996, she claimed: “It is a dream come true”. The victory was all the more poignant because she was beaten by Williams in the 2016 Wimbledon final, who came over to her side of the net with a congratulating warm embrace. 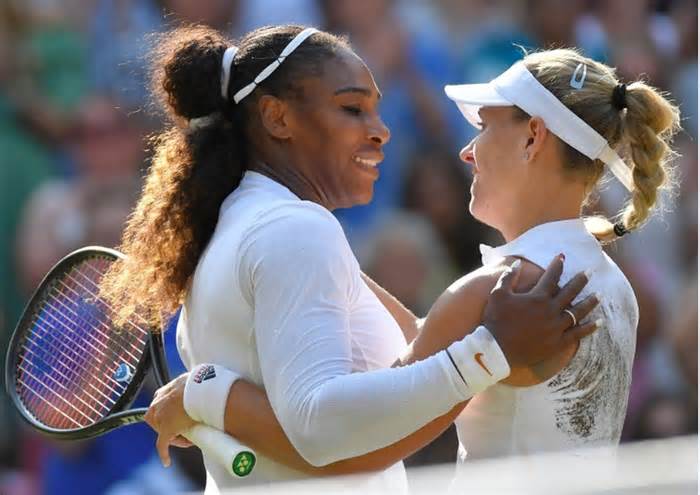 Williams was just a single victory away matching the women’s tennis record of 24 Grand Slams. She has been trying to get her career back after giving birth to her daughter, Olympia, in September. The birth was followed by complications and surgery. Alexis Ohanian, Williams’ husband, said that she was just getting started in her comeback, noting that,

“Days after our baby girl was born, I kissed my wife goodbye before surgery and neither of us knew if she would be coming back. We just wanted her to survive—10 months later, she’s in the Wimbledon final”.

In an interview after the game, Williams stated she was playing for all mothers that want to go back to careers while raising children.

“I had such a long struggle to come back and it was really difficult and honestly I feel like if I can do it, they can do it. I’m just that person that’s saying ‘you can be whatever you want to be if you want to go back to work.’ “

Due to the massive challenges she has overcome, a flurry of social media reacted to her inspiring words, with many pundits hailing her as a ‘Super Mom’. Unsurprisingly, Serena and her husband now have their sights set on future titles while raising their daughter.

If you want to learn how cognitive training technology can help tennis skills, then check this blog.

Winning the Game of Minds – NeuroTracker and Tennis