Acclaimed sports scientist Dr. Leonard Zaichkowsky took some time out to talk with the NeuroTracker team about his upcoming book ‘The Playmaker’s Advantage’.  Here we’ll cover why this book, which was co-authored with Dan Peterson, is set to drive a new culture of mental performance training for pro and amateur athletes alike.

What is the ‘Playmaker’?

The Playmaker on any sports team possesses an elusive, intangible quality combining anticipation, perception, and decision-making skills. The playmaker can make a plan and make a play under pressure. This quality raises their game above the competition and allows them to pass when no one else can, anticipate the movement of opponents, and avoid costly mental mistakes.

They are the decisive general on the court or field, and because of this, they also make everybody in the team better.  Sydney Crosby is an iconic example, someone Dr. Zaichkowsky spent a lot of time interviewing for the book, along with many other sports professionals.

The Goal of ‘The Playmaker’s Advantage’

Perceptual-cognitive training – the mental dimension of sports – is the next frontier in sports performance. However, this approach has been largely ignored in professional sports.  Dr. Zaichkowsky believes it’s important to get the message out to athletes and coaches about the fundamental value of this approach to performance conditioning,

“The million dollar question is can search, decide and execute skills be taught? The answer is yes they can be. The challenge is that most people just really don’t know how to train the thinking system, which is what we’re trying to teach. An advantage now is that technology is getting more and more accepted in the sports world, and this is facilitating training of the perceptual-cognitive system.”

Tapping into the Coach’s Knowledge

Dr. Zaichkowksy explained that some coaches don’t even know there’s something missing in their training regime. Others know the importance of the mental edge, but don’t know the training methods available, and aren’t even aware when they are structuring their training around thinking and decision-making skills.

“When you ask coaches how they train mental performance they usually scratch their head, even though they commonly use tight play drills, which is mainly about training the cognitive system.  But rather than training by chance, this approach can be done much more deliberately and expansively.”

That said, coaches are slowly catching on, and there are sports leaders who are going out and preaching that what coaches need to know is how the brain works, how people learn, and how you can teach mental sports skills.

Leading the Way with NeuroTracker

As the first person in North America to use NeuroTracker, Dr. Zaichkowsy implemented cognitive training and assessment with the Vancouver Canucks in 2010, “When I look back this was way ahead of its time, and it certainly took a lot of work to get the team to understand the benefits of this fundamental approach”.

He used the NeuroTracker for two years, leveraging the cognitive data to guide potential draft choices based on the speed of processing.  The aim was to identify smart players, and then to make the most of their skills on the ice.  Increasing the speed of perceptual-cognitive processing was important for improving response control for making accurate decisions, as well as managing mental pressure in order to execute plays without errors.

Dr. Zaichkowsky is also keen on measuring executive functions with tools such as the AIQ (Athletic Intelligence Quotient), replacing out-dated assessments like the Wonderlic Test. While standard personality or psychology tests don’t tell you much about who is a sharp or quick thinker, executive functions correlate with an athlete’s cognitive aptitude on the sports field or pitch. For example, it’s known from sports science studies that the genius soccer player Andre Iniesta has executive functions that are way above normal and that such measures can even be predictive of goal scoring rates for strikers.

In the book, the relevance of perceptual-cognitive training is covered for performance traits you wouldn’t automatically associate with mental training.   For instance, explaining that ‘grit’ is an attribute that can be learned through deliberate thinking and practice, in Dr. Zaichkowsky words,

“Grit is about the person who never gives up, they have the resilience, and they set the tone for the team.  Critically these individuals believe they can always keep getting better.  This was certainly true with Crosby”.

Even the limits of physiological fatigue can be potentially extended through the brain, for example, the book goes into the latest research on how a regulatory mechanism in the brain has a significant influence over an athlete’s VO2 Max.  As Dr. Zaichkowsky put it, “The brain is pretty damn powerful – it can push performance to another level.”

Even the concept of choking in high-pressure game moments can be something avoided with the right approach. Dr. Zaichkowsky explained that making mistakes is not always choking behavior, often it’s related to the standard of play by the opponent.

“When players make unforced errors, these are often based on not being able to think quickly enough, and not being sufficiently prepared for planning and anticipating how an opponent is going to pressure them.   This is something coaches can teach in practice, which will lead to better performance on the field.”

About Dr. Zaichkowsy – as a professor, researcher, and consultant, Leonard Zaichkowsy has pioneered sport psychology by bringing cognitive neuroscience and sport performance together as an interdisciplinary science. His books and research publications demonstrate the importance of an athlete’s brain in anticipating and acting on opportunities during competition. He has consulted with teams in the NBA, NHL, NFL, MLB, Australian Rules Football, the Spanish men’s national soccer team, and Olympic sports organizations around the world.

If you are interested in finding out more about the perceptual-cognitive approach to cognitive training, then check out Dan Peterson’s and Dr. Zaichkowsky’s website ‘80% Mental’, geared to helping teams develop their Athlete Cognition.

‘The Playmaker’s Advantage’ will hit bookshelves and online stores June 12th, copies can be pre-ordered here, 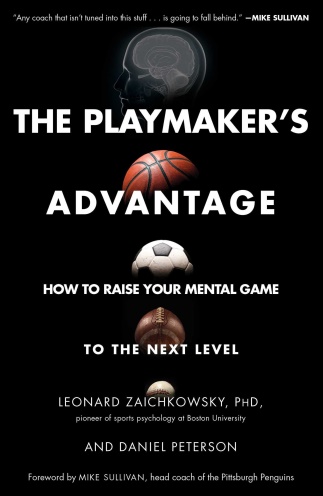