Genetics, favourable resources, and hard work are often cited as factors that can catapult an athlete from amateur to pro. But, what if there was another component? What if it’s what’s between the ears that differentiates a top player from a great one?

Well, studies have shown that elite athletes have a distinct cognitive threshold. It’s this superior mental performance that gives them a critical performance advantage. Under pressure, they have unique abilities that allow them to remain aware, in control and rapidly process everything that’s going on around them. This leads to more tactful and accurate decision-making in competitive play.

Can You Improve Your Cognitive Threshold?

Okay, so elite athletes already have a superior cognitive threshold. But, can it be improved? What about for amateur athletes? Can they enhance their cognitive abilities to become elite? Fortunately, basic cognition is something you can train. Mick Clegg, a professional coach and trainer, believed early on in the importance of integrating basic cognitive drills in his players’ training regimes.

When Clegg joined Manchester United F.C. in 2000, the correlation between cognitive components and performance, became even clearer. He travelled to Montreal to investigate NeuroTracker, the technology that powers NeuroTracker Personal. At the time, the program was only available to a handful of Olympians. Clegg, who left the club in 2011, has used the program on a plethora of athletes, and continues to do so today!

As Clegg continued to use NeuroTracker on his athletes, he started to add on complex dual-tasks to their program. These athletes moved from the basic program to performing skill-relevant drills under progressively greater cognitive loads. For instance, some athletes were required to lift weights while they completed their trials. These dual-tasks allowed the professional athletes to adapt and further develop their cognitive abilities.

Clegg even founded his own advanced performance center named ‘Elite Lab’ which he further expanded and developed in 2013. At the Elite Lab, he integrates NeuroTracker in all of his clients’ training programs alongside a range of the latest training technologies. Clegg has run over 10,000 NeuroTracker sessions with a wide range of professional athletes, and has helped create world champions in many sports, such as kickboxing, taekwondo, and speedway racing.

He has a proven track record for moving each individual to their next level of performance, all with integrating cognitive training into each athlete’s development program. Whether the mission is to achieve a first team spot in an EPL team or become a world number one, Clegg has succeeded. He’s trained pro athletes such as Cristiano Ronaldo, David Beckham and Wayne Rooney. Due to this reputation, he’s now regularly asked to provide seminars around the world in regards to his unique approach.

To become even better at your sport, start cognitive training today! It’s never too late to enhance your cognitive abilities so that you can perform at your best level. Seeking to raise your situational awareness? Want to improve your decision-making abilities in competitive play? NeuroTracker Personal provides the tools you need to enhance your athletic performance! 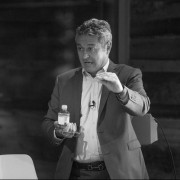 President and CEO at NeuroTracker. With more than 30 years experience as a corporate lawyer and as an entrepreneur, Jean has held senior management positions in start-up and high-growth companies spanning the life science, technology and manufacturing sectors.